It’s been really busy here at Computers for Schools Yukon, which may be apparent from the lack up updates on our website.

We realized one day that instead of answering all questions individually, we could build an online resource where clients (if they prefer) can research and find an answer, or ask a question that anyone can answer.  Don’t get us wrong, we still enjoy talking to all of you, but an online forum will help to centralize our sage wisdom and advice, as well as to facilitate more conversation among Yukoners.  Who knows?  It may even spawn some cool projects if like-minded people meet up!

You can access this forum by heading to www.cfsy.ca/community

As always, if you see anything that could be innovated or improved… maybe even re-jiggered, let us know.  We love hearing from the community because everyone has a unique perspective!

Maybe that’s not how the saying goes, but I hope that the grass truly is green on the other side of the fence for our technicians as they go on to bigger (and less temporary) jobs.

We’ve been really busy as usual, and had extra technicians to help with everything, which ironically had me busier wrangling everyone together.  Our current technicians are all finishing up here on March 31st, and the 4 we have will be replaced with 2 new trainees that we will be able to hold on to for the regular 6 months as compared to the shortened period for our current staff (don’t worry, they got higher wages due to being stuffed into a shorter period).

Here are the staff who are moving on:

Paul Banks is already working in the field of solar technology and he took off a couple weeks early on March 10th to make that transition.  So he’s currently turning reasonably passive solar radiation into potentially dangerous arcing currents of electricity.

Josh Durand is looking to embed himself deeply in IT somewhere and continue to learn all things technology, and somehow he’ll leverage that to become king of the Yukon.  That doesn’t exist you say?  Well yeah, not yet anyway.

Nicholas Skookum has a varied set of skills now, and although I asked him where he wants to work, he said he’ll be happy wherever he can find work that will pay his bills, as now he has a sweet ride that runs on fuel… not dreams and unicorn farts.

Jin Lee didn’t want us to take his picture.  The only reasonable conclusion I can draw from that is that he’s an undercover agent from some obscure acronym organization.  He says that he’ll be getting a job in the food industry, bringing whatever restaurant he’s working for into the modern age.  Of course, that’s probably just part of his cover.  We’ll probably never know who Jin Lee really is.  Or if that’s even his real name.

If you’re around on Thursday October 29th, and are looking at finding a new job opportunity, or volunteering in an interesting organization where you can learn new skills, come check out the 2015 Education, Career and Volunteer Expo at the Kwanlin Dun Cultural Centre. We’ll be there talking to everyone who’s interested who stops by our table. 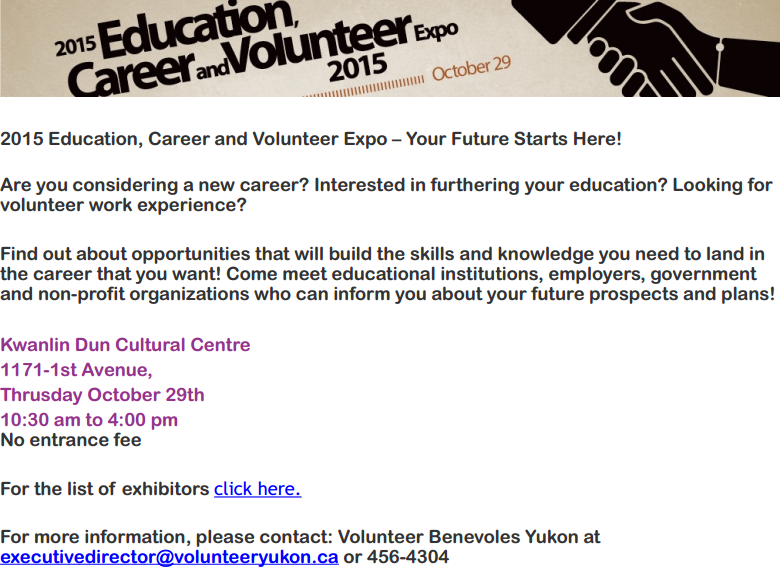 Many parents are subconsciously hearing the song “It’s the most wonderful time of the year” as their kids go back to school.  I personally have some friends and family who have little people heading in for their first year of school, so I imagine situations like that are more bittersweet.  Either way, it means that we at CFSY are shifting into a new gear as schools and students need computers to continue their education.

Already we have had two teachers contact us who want to try a whole classroom solution where every student has a laptop available to them and there will be projects where they can all collaborate together.  We’re pretty excited to help support them in this pilot project.  Computers are becoming more and more of a foundational tool in our society, so any time there can be education in how to effectively, and securely use computers it’s a major benefit.  So many people use computers nowadays with very little knowledge or regard about their security, so we want to support computer education in any way we can.

Other than the new orders as school activities ramp up, we have some less happy news as well.  Our technicians in the Technical Work Experience Program that we’ve had since April 2015 will be moving on in their careers at the end of September as their contracts with us end.  I realize now that we didn’t take an official picture of everyone, but here’s all of us at the Job and Volunteer fair in April when they first started: 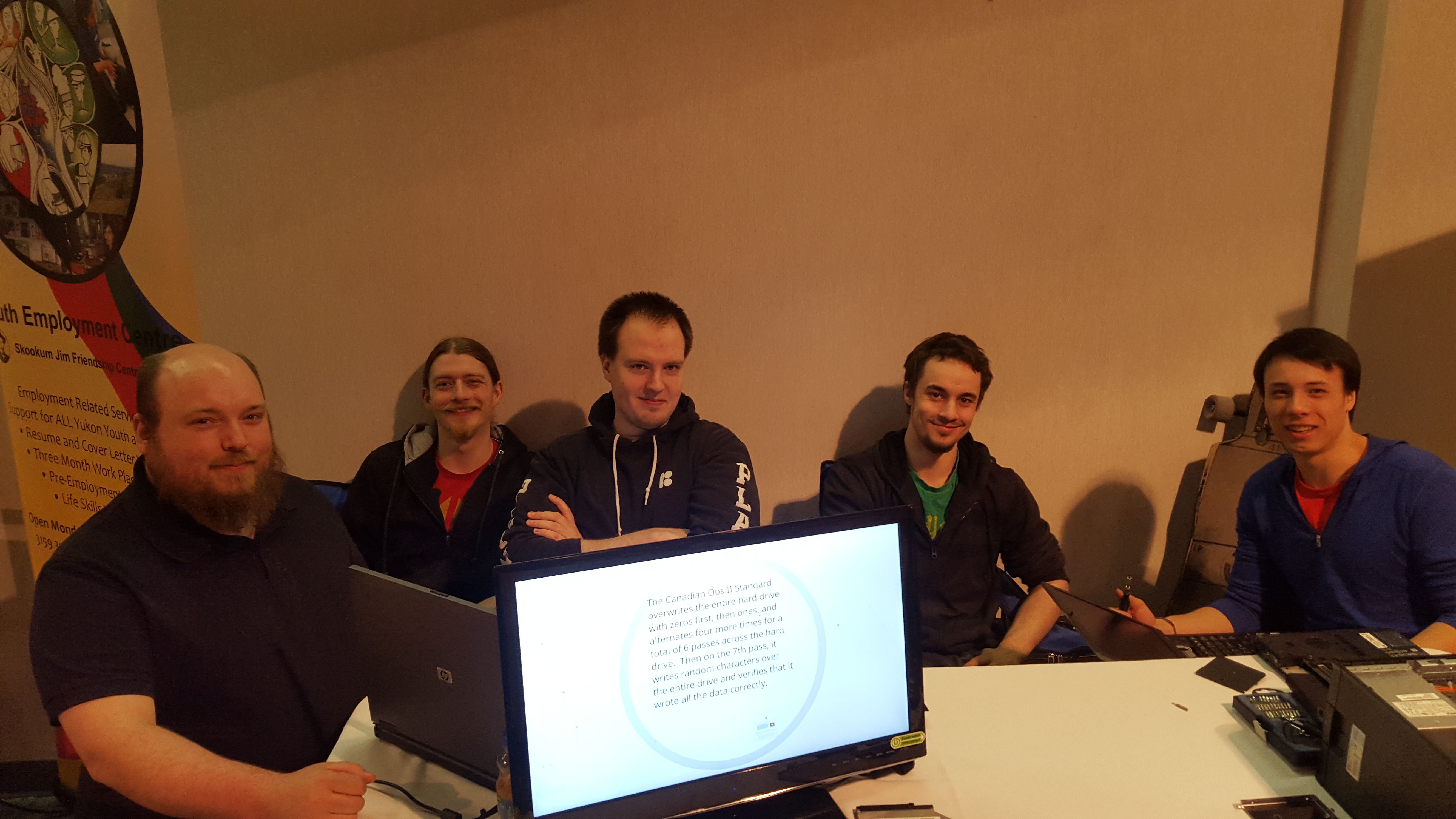 So it will be just be our volunteer Ron McFadyen, and Ben and I so far who are working on computers here at CFSY from October until March of 2016.  With that in mind, you can understand that we will happily train anyone who has an interest and some free time.  As an added bonus, I don’t even have that dwarf beard anymore!  😀

We wish our T.W.E.P.’s all the best luck in their future endeavors, and we’ll support you however we can.

Here we are approaching the free release of Windows 10 for anyone who owns Windows 7 or 8.1, and our main battle has been cooling our office.

The weather has certainly been an obstacle for us in the office, even though it’s been really nice when we’re outside. With all of the computers that are running in such a small space, it’s typically 10 degrees hotter in here than it is outside. To put this into perspective, today my coworker Danny Lewis from Raven Recycling came into our office and said, “Wow it’s hot in here”. Currently it’s rainy and cool outside, and we have our little air conditioner running. It’s a typical problem within any server farm, however we aren’t a server farm, merely a small office with more than our share of computer equipment running.

In other news I felt it might be good to mention a little more about the upcoming release of Windows 10. It’s important to do some research before you upgrade to find out how any of your important software will work in the new environment. It’s very possible that your favourite game, or accounting software is popular enough that it will soon get an update to make it work, although it’s very possible there may be complications with software and hardware comparability. So be sure to do your research before you upgrade. Windows 7 will be around for quite a while yet (I believe it’s 2022 or something like that).  The only practical deadline is that Microsoft won’t provide the free upgrade to Windows 10 after July 2016 (next year).

So, in case you’ve been living in solitude within a Tibetan monastery, or perhaps a hunting cabin in the woods, Microsoft has announced that anyone with Windows 7 or Windows 8.1 will be getting a free, full upgrade to Windows 10.  The upgrade becomes available after July 29th, and if all the updates are installed on your computer, you might have noticed a little Windows icon in the notifications in your taskbar to the bottom right of your screen.  If you click on that icon, you can sort of bookmark your spot for downloading the new Operating System which will set you back a little more than 3GB of bandwidth.  It will also introduce you a little to Windows 10 and some of the details that you can expect once it’s installed.

If you’re feeling pressured, you don’t actually have to upgrade to it.  Windows 7 will still receive security updates up until 2020 I believe.  You have one full year to decide if you’d like to upgrade.  After the deadline though, you’ll be subject to whatever the cost is at our local retailers.

If the concept of Windows 10 is new to you, it would be a good idea to look up some videos on Youtube or read some articles.  Techspot.com has some informative articles written with a lot of commentary from readers underneath.  Here’s one from PC World that might explain all of this in another way:

Computers for Schools Yukon hasn’t seen momentum like this in a long time.  In October we lucked out and had some really great technicians apply for the Technical Work Experience Program.  Here in March 2015 when it came time to hiring some more T.W.E.P. Technicians, we got even more great applications in, so the work is spreading and quality talent is wanting in to this program!

This year, unlike in the past, CFSY registered and set up booths at the Spring Job and Volunteer Fair, as well as the Lions Trade Show.  Technically at the Trade Show we shared a booth with Raven Recycling, but the point is that we were there, getting the name out there.  The experience was great because so many people had no idea that we were open and that they could recycle their used computers by dropping them off at the Raven Recycling Society depot for $5 per monitor, laptop, or desktop (no CRT monitors unfortunately).  At the Job and Volunteer fair we were able to share with a lot of interested people that volunteering here at CFSY means that a volunteer gets lots of great training and expansion of computer skills as they in turn help us.

As always, let us know if you would like any more information on how we operate and how we might be able to help you out in your school or educational organization.

It’s nearing the middle of February and things are smok’in along here at CFSY. Our technicians have been churning out computer orders so efficiently that we’ve run out of 32 bit Windows Licences ahead of schedule. More are on their way though!

We are also learning more about Ubuntu Linux as an option for computers. It’s an excellent option for some people, especially those that don’t have software that will ONLY run on Windows. Linux can be made to be extremely secure, and yet has all the flexibility anyone would ever need for a good web browser, or word processor. Let us know and we can help to see which option will serve you best.

I’ve noticed that we haven’t been updating everyone more than once per year.  It’s easy to let work take over and forget about the website  🙂  We’ll endeavor to update everyone more frequently.

The first big change that is happening is correcting something that shouldn’t have happened in the first place!  In the past Computers for Schools Yukon has mostly been giving to individuals because the school board is more interested in buying Mac computers for the schools.  It was explained at our Annual General Meeting that we have to concentrate on providing computers to larger parties who are better able to determine if an individual qualifies for the program.  We also don’t want to take potential customers away from local businesses.  So we will be working with teachers, YG departments, as well as First Nations departments to get computers into your hands.  If you need a computer, let us know and we’ll try to connect you with an organization that you can get a computer from.

With Microsoft no longer supporting windows Xp, we wont be able to give out computers with windows Xp installed and will be completely switching to windows 7.
Because we are billed for the individual windows 7 licenses we will have to charge $15 per computer.

If you have an old Xp system from us and would like an upgrade, submit a request and state in the requested specs field that it is a replacement of an old xp machine